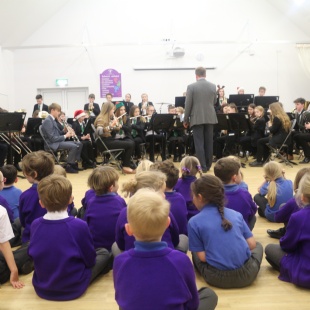 The band held two concert, one for the younger chidlren and the other to the older pupils. They palyed well-known songs including Michael Jackson’s ‘Thriller’, Ravel's ‘Bolero’ and ‘Let it Go’ from the Disney film Frozen.There were also some popular Chsitmas songs such as ‘Rudolf the red nose reindeer’ to put the children in the Christmas spirit and get them singing along.

Some of the band members played demos and soloist performances on their instruments. This allowed the children to become more familiar with the types of the sounds they can make.

Direct of Music at CBA, Mr Clive Wears said ‘We visit Gretton every year as part of our primary school tour. It is always a very popular event with the children and we try to make it really interactive so the children can get involved and have lots of fun. We also try and teach them about the different instruments.

‘We have a stong connection with Gretton, which we want to continue building on. We feel it is of great importance that the children become familiar with some of the staff and students at CBA as lots of them will come to us for secondary school.’