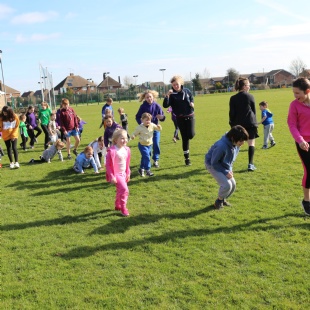 To support Sport Relief, our pupils took part in a range of themed events.

To support Sport Relief, our pupils took part in a range of themed events.

All pupils took part in a sports themed mufti-day by donating money to the charity. The whole school then listened to an assembly, where they found out all the charity and the work they do.  Miss Phillips, who led the assembly, spoke about some of the benefits of exercise such as improved mood and increased confidence. She explained how projects run by Sports Relief can help those less fortunate than us by offering them a safe place to play. The pupils then watched a case study of an 11-year-old girl in Africa who’s had the opportunity to learn to skateboard through the charity.

After the assembly, the whole school took part in a mile run around the field, where the older and younger students paired up to complete their miles in the funniest ways. Some ideas the children came up with included bunny hops, summersaults, walking backwards and dancing.

Well done to everyone who took part, you all did brilliantly.

We will announce the total money raised shortly and prizes for the most inventive ways to complete the miles will be award to students.