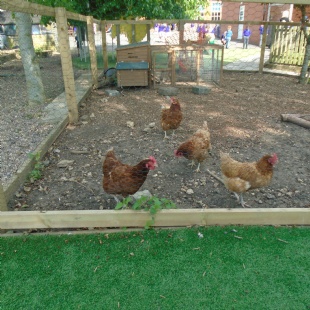 We started the new term on Monday with a whole school science day.

We started the new term on Monday with a whole school science day.  The theme was ‘Chickens’ so that we could use the school chickens and make a link with our Take One Picture project.  The day began with a *video link of an egg farmer in Wales who had five thousand chickens, explaining what he did.  Each class then had their own challenge to complete during the day.

Lots of science learning took place, especially when the chickens did not behave as expected for Ash class and they had to approach their investigation in another way.  The highlight was probably when Arabella from Rowan class, who had investigated Humpty Dumpty, dropped an egg in assembly.  It survived because it was protected in a bag of flour.  Well done everyone, lot’s of super learning.