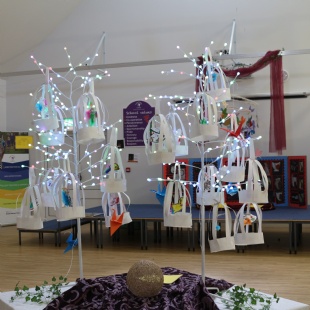 Gretton’s school hall was recently transformed into an open art gallery, welcoming members of the local community. The exhibition showcased a series of artwork produced by the pupils in response to the painting ‘An experiment on a bird in the air pump’ by Joseph Wright of Derby.

Gretton’s school hall was recently transformed into an open art gallery, welcoming members of the local community. The exhibition showcased a series of artwork produced by the pupils in response to the painting ‘An experiment on a bird in the air pump’ by Joseph Wright of Derby.

The project was produced as part of a competition called ‘Take One Picture’ organised by the National Gallery, which challenged the children to focus on one painting and respond creatively to its themes and subject matter, historical context, or composition.  Each class came up with a different focus from the picture based on pupil-led discussions.

Some of the classes chose to concentrate on the contrast of light and dark in the picture and created stain glass windows from tissue paper and oil painting on black card. Other classes focused on the ethics of the picture and discussed if the bird should be set free. The pupils created 3D models of the birds trapped in cages and created artwork representing their own ideas of what freedom means to them.

Miss Knibbs said: ‘ We launched the project to the students by leaving little snippets of the picture around the school, this could be a close up of someone face or an item featured in the picture. This then promoted questions and discussions amongst the children before we formally launched the project in assembly. The pupils then continued their discussion in their classes and took part in activities, which made them think more in-depth about the picture before deciding on their chosen theme.

‘In Oak class we conducted an experiment to see what happened to a candle left in an air pump. The children discovered that the candle went out because of the lack of oxygen and realised that the bird would also die if it was left in the air pump.

‘Overall, the  exhibition has been a great success. The project has inspired creative learning across the curriculum and the whole school have worked together to produce an amazing exhibition. The children have produced such a high standard of work and it has been lovely to be able to share this with the wider community.’

Some of the children who visited the gallery said:

‘I like the gallery because it was creative and fun to look at.’

‘It was amazing! I loved Oaks and Sycamores display where you shone a torch on the candles.’

‘Brilliant ideas! The artwork is beautiful.’

‘The best gallery I have ever been to.’

The children’s exhibition will now be submitted to the National Gallery, where it has a chance of being selected to become part of the ‘Take One Picture’ Exhibition, which will be showcased at the gallery later this year. The competition is part of a scheme led by the National Gallery to inspire a lifelong love of art and learn by promoting the role visual arts within the curriculum.

By studying a different painting each year through the ‘Take One Picture’ approach, the children know seven peices of art in great detail by the end of the journey through Gretton school.
For further details on the project please visit the National Gallery website.

To view more photos from the event please click here.