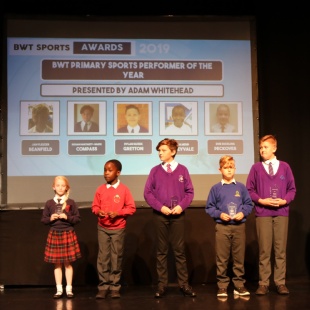 Well done to our students who won prizes at the 2019 Sports Awards including Rory Sammon who stole the show, along with our Year 5 and 6 football team who were named Primary Team of the Year!

Well done to our students who won prizes at the 2019 Sports Awards including Rory Sammon who stole the show, along with our Year 5 and 6 football team who were named Primary Team of the Year!

Dylan Guzek was described as ‘an all-round sportsman who plays football for Kettering Town Football Club’ when he picked up his Gretton Sports Performer of the Year award.

The Year 6 Sports Crew took to the stage to receive the Outstanding Contribution to Leadership Award. They oversee break and lunchtimes to ensure that students at Gretton Primary School get excellent sporting provision.

Sporting Volunteer of the Year was Finlay Kavanagh. The audience heard that Finlay volunteers to coach younger children in his football club once a week and he wanted to follow in his father’s footsteps of becoming a football coach.

Miss Smith said: ‘This year within the Trust we have focused on boosting physical activity within our schools with the introduction of a daily physical activity task such as the Daily Mile and Go Noodle. The Daily Mile makes children fitter, healthier, happier and has a positive impact on their behaviour and concentration levels. It is simple but effective, enabling every child, including those with special needs, to be active every day. Go Noodle is a video tool which encourages pupils to move with purpose to a variety of videos across the curriculum. It is so good to see that these children are learning good habits.’

Huge congratulations to our Year 5 and 6 football team who beat off stiff competition to be named  BWT Primary Team of the Year. Miss Smith said: ‘The team has really grown this year particularly when they won the Small Schools Tournament. They came first out of 64 schools in Northamptonshire. Well done to all the other teams as well as there have been some fantastic results this year.’

To see a gallery of photographs from the event click here.